By Nicole Warner
Under Deutsch lernen, A1, A2, B1, Vokabeln & Podcast
3 min read

2 Simple Reasons Why You Should Learn German Swear Words

(Note: There are no swear words in this post.)

Are you surprised that you should learn German swear words? You shouldn’t be.

So why would I teach you swear words in German? Why would I enable you to potentially offend someone?!

There are two reasons why it's actually a good idea to learn German swear words, and they're going to make a whole lot of sense to you.

Here are two reasons why it's actually a good idea to learn naughty words in German.

1. You want to know what’s going on around you.

You'll hear German all around you, in the subway, on the street, in the museums, at the theatre, at the office, and in der Kneipe after work. You might overhear a conversation that's about to get heated.

You might walk past two people having an argument.

You might turn the corner in some German town and walk into an uncomfortable situation.

When you know what's going on around you, you can make a better decision on what you're going to do. Is it appropriate for you to try to diffuse the situation? Is it best to keep walking, because it's not actually a big deal? Should you turn around and walk the other way? Is it bad enough that you should call the police and get help for someone?

So just as you know what loads of swear words are in North American English, but you probably don't use them very often *wink, wink*, your awareness helps you navigate different situations.

Consider German swear words in the same way. Be informed and know what's going on around you as you navigate your German learning and travel.

2. You don’t want to misuse a naughty word.

I used one swear word in the past tense because I was trying to put a different verb in the Perfekt that I wasn't familiar with, and accidentally ended up with, um, the wrong word...and once I didn't understand a slang word completely and used it in polite company.

Knowledge is power, and when you know what words mean you can employ them and they can assist you in navigating conversations, situations, and relationships.

When you recognize strong language, inappropriate language, and swear words for what they are, you'll know if something that someone has said to you is inappropriate, bad, or really bad. You'll have a better handle on telling the difference between a really inappropriate joke and a demeaning insult.

Swear words aren't covered in regular textbooks, and you need the opportunity to learn them in context. Social media is NOT the place to learn strong language, mainly because it's people complaining and cursing AT other people, which is rude.

Instead, we're going to explore the words in a way that's low-key and really fun in the German Swear Words Class on February 26th, 2022 at 11 am Central. You'll walk away with an understanding of which words are horrible, inappropriate, or just plain hilarious to you as an English speaker.

This class is for all you German language lovers and German learners! 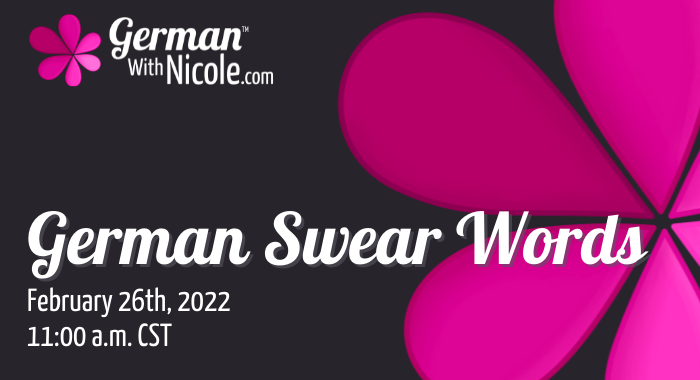 Watch the video, read the class description page and get yourself registered. This is a live, online class via Zoom with Frau Warner.

To the Swear Words Class Page

By Nicole Warner
Under Deutsch lernen, A1, A2, B1, Vokabeln & Podcast
3 min read
7 Funny German Words and Their Meanings
How to Say Ukraine and in the Ukraine, Ukranian in German
Like
Share Tweet Share Pin it