Karneval is known as "die fünfte Jahreszeit" --the 5th season. It's known as Karneval, Fastnacht, or Fasching in many places in southern Germany.

Karneval is a big deal.

Their costumes are pretty fantastic, one of Heidi Klum's favorite things, and their costumes are no exception at the parade on Rosenmontag. But let's back up a few days and a few months to give you the best idea of Karneval.

It begins on November 11th at 11:11 a.m. because 11 is known as the "narrische Zahl," the fool's number, and continues through Faschingsdienstag, Fat Tuesday for Americans, the day before Aschermittwoch (Ash Wednesday).

The last week before Aschermittwoch is the high point, especially since this is primarily a Catholic time period (even though Karneval is losing its connection to the actual religious holidays) and it leads up to the Fastenzeit (or Lent), lassen sie die Sau raus! (They let it all hang out.)

Here are the main days in this last week:

This is the day when the ladies go nuts. Women dress up in costumes, go to work, eat Berliner all day long, and when they see a man with a tie, they cut his tie off. He is then obliged to walk around all day with a tie that's been cut to a few inches long and everyone knows he's been "victimized" by Weiberfastnacht.* Sometimes men forget to wear on old tie on Weiberfastnacht so they can "buy" their way out of it with a bottle of champagne.

But it's also a good way to get rid of an old tie you don't like any more. ;)

*Weib (plur: Weiber) is an old word that now serves as a derogatory term for a woman. Sehr unfreundlich.

Rosenmontag is known as Shrove Monday, Rose Monday, or  in English. This is the day that the huge parades take place in cities like Köln and all over Süddeutschland. Parades both large and small include floats that may be made like a scene from a movie that's currently popular, or they may be political in nature, like this year's float of the so-called "Protz-Bischof" Tebartz-van Elst, the "Show-off Bishop" who used millions of Euros (including funds intended to help poor families pay for housing) to build himself a swanky complex.

Here he's pictured in (an unfinished) bathtub of money.

Click here for more sneak-peaks of Monday's floats from SWR1.de.

In Southern Germany it's very common to find folks like this scary dude and his friends: 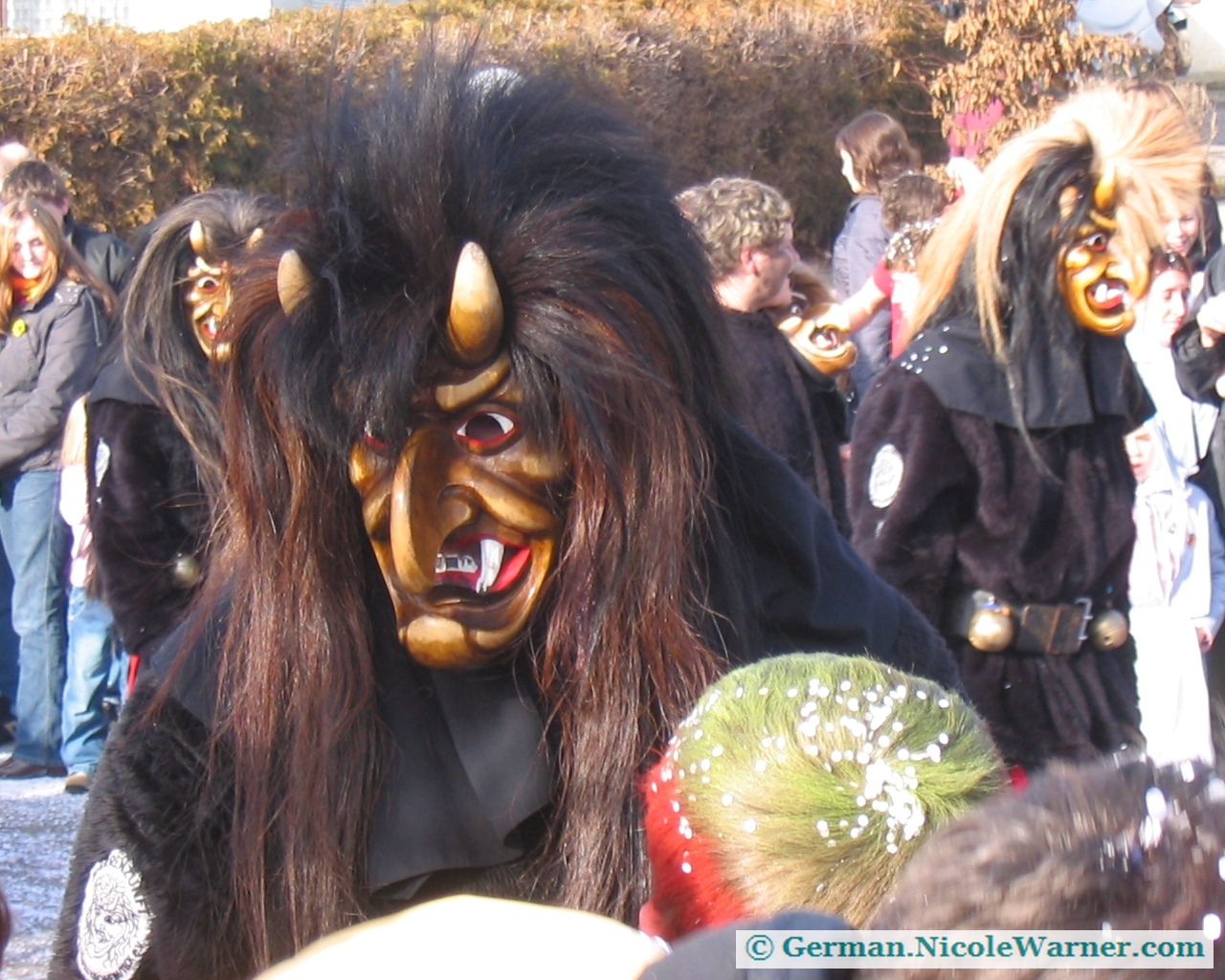 In Southern Germany Fasching is also about running out the winter spirits--clearing the way for Spring to arrive. Part of this custom are these incredible, hand-carved, wooden masks. Another part of this custom is the secrecy of who is behind the mask; no one knows who wears which mask, which allows for lots of mischief, like spreading little snips of paper all over a kid's head (picture, bottom right) or stuffing their pockets full of it.

Stealing a parade-goer's scarf...yeah, that happened. But I chased the guy down and got it back. Did I mention he was three sheets to the wind?

When Lent begins, the party's over. And everybody searches high and low for the aspirin. ;)