End of an Era at Aldi

The brothers Albrecht founded the discount chain Aldi in Germany after World War II. Now, four years after his brother Theo, Karl Albrecht has passed away, signaling the end of the first generation at Aldi.

The brand Aldi has grown to become a world-wide chain of discount stores, with their own Aldi-branded products and efficient store layouts, with weekly specials on special purchases--a different theme every week. 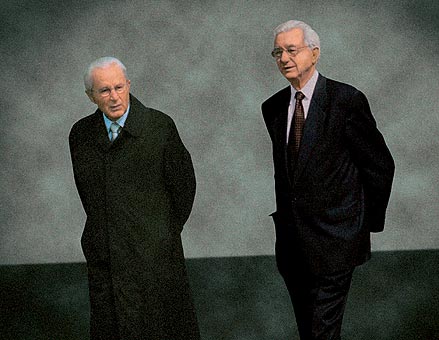 One of the things the brothers Albrecht were best known for was their incredibly high level of privacy and lack of publicity. There is only one famous picture available of them (left), partially because they were not interested in fame, but in running their business, but also because Theo Albrecht, who died in 2010, was kidnapped in 1971 and returned after 17 days and a ransom of 7 million Marks was paid.

Aldi is significant in German culture and the German economy, as anybody and everybody shops at Aldi--their products are frequently top-shelf, but with bottom-shelf pricing.

They have almost no advertising (that's different here in the States) and because they use in-house brands, you're not paying for some fancy-shmancy packaging and you're also not paying for it to be marketed to you.

Read more about the death of Karl Albrecht and the Aldi legacy at the Deutsche Welle (with video & audio).

Questions to answer when you read the article: