By Nicole Warner
Under A1, Grammatik & Vokabeln
2 min read

How to Use Separable Verbs in German

Separable verbs are not hard to understand, however learning to use them takes practice and time.

For the purposes of this first section, we'll use two separable verbs in the present tense – so we'll use them to talk about now.

A separable verb (in German: ein trennbares Verb, plural: trennbare Verben) is a verb that requires you to do three things :

That's what most of you understand, all of you who read this first section.

Here's what will set you apart from all the rest: learn to actually use these verbs in German. Learn to separate that prefix, conjugate the stem (what's left) and tack it on at the end 100% of the time.

Understanding a rule is one thing. Practice is something entirely different.

Einatmen means to breathe in or to inhale.

Ausatmen means to breathe out or to exhale.

Now we apply the rule. Let's use it with “ich.”

That happens to be the sentence “I breathe in.”

Now do the same thing with ausatmen.

You should end up with:

Here's an opportunity for you to practice German with me, Nicole, every week.

It's good practice in reading, writing, speaking and listening, it's for German learners and it's called die gute Stube.

Check it out here.

How do you ask open-ended questions in German? With W-Fragen! 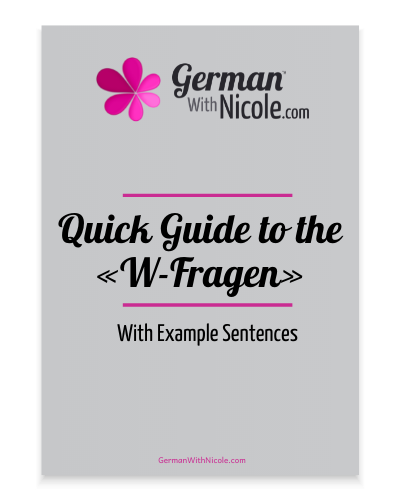 This PDF guide covers all the W-Fragewörter you need to know at the A1 and much of the A2 levels.

You'll go further with this guide, as it helps you learn the main Fragewörter faster.

This PDF includes the English translations!

Sign up today and you’ll receive a free copy of the popular Quick Guide to the «W-Fragen» as well as all the subscriber exclusives.